web design… and other stuff

I’ve written before about emojis and keyboard shortcuts in google hangouts. But what if you want to enter emojis while using your windows PC?

You can, and it’s super easy…

As long as you’re running an up to date version Windows 10 you can bring up the windows emoji keyboard with a simple keyboard shortcut:

Annoyingly you can only select one emoji at a time.
Once you’ve selected an emoji, the keyboard disappears.
So if you wanted multiple thumbs up, for example you’ll have to copy+paste or bring up the keyboard again. 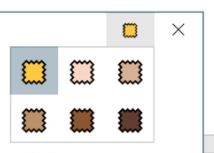 I was hoping to find an option for emojis in google meet for GSuite as when running larger meetings in Google Meet, it can be difficult to gauge real-time feedback as you are speaking.

A while ago I posted about all the emoji keyboard shortcuts for google hangouts chat. Unfortunately it turns out that Google Meet does not currently support emojis in text chat*

However… i have found a handy chrome extension which allows team members to send real-time emoji reactions, such as thumbs up, to presenters and speakers during meetings on Google Meet. (Similar to reactions in Zoom)

You can find it here: https://chrome.google.com/webstore/detail/nod-reactions-for-google/oikgofeboedgfkaacpfepbfmgdalabej or search the chrome webstore for it.

Hopefully this helps anyone also using GSuite and trying to get the most out of Google Meet.

This book in fact…

OK, well technically I had very little to do with the book in question.
I just backed it waaaay back in time (June 2018 to be precise) along with 9364 other geeks, gamers and fans of NerdCubed on Unbound (a crowdsourcing platform for books)

I’ve yet to read it, as it just arrived this morning, but as a supporter of the book i got to have my name or whatever else I wanted immortalised in the book forever! So naturally ,being the geek that I am, I chose this blog/website.

It’s a real, 100% bonefide book… available from waterstones which is kinda cool.

If you came here from seeing my website in the book please comment below, It will be interesting (for me, at least) to see how many people were bored/dumb enough to come here.

You can easily prevent these HTML files being created by the “XML Sitemap Generator for WordPress” plugin.

This is NOT in your site’s robots.txt file but instead it’s a meta tag in all html sitemap pages generated by the plugin.
The only page Google needs is the sitemap.xml file these extra html files aren’t needed.

This article is specific to “XML Sitemap Generator for WordPress” https://www.arnebrachhold.de/projects/wordpress-plugins/google-xml-sitemaps-generator/

I had the same problem when trying to connect to imap using gmail accounts.
Here’s how I resolved the issue..

Now do a send/receive to test if it is now working a bit quicker. Hopefully it is and your imap speed issues are sorted!

I couldn’t find anything on the hostgator website about GDPR, so emailed privacy(at)hostgator.com

Update: Hostgator have since added some gdpr compliance information:
https://support.hostgator.com/articles/pre-sales-policies/general-data-protection-regulation

Here is the email we sent to hostgator:

“We currently use Hostgator to host our websites.
Please can you let me know your status with becoming compliant with the new EU data privacy law (GDPR) which comes into effect on 25th May? https://gdpr-info.eu/
The law states that all our data processors (suppliers) must adhere to the law even if they are not based in the EU.”

[27/04/2018] Currently, HostGator is not compliant with the General Data Protection Regulation. However, we are committed to achieving compliance with the GDPR by May 25, 2018. This will include work that will be “behind the scenes” such as the reviewing and revision of our agreements, internal processes, features, templates, and policies as necessary to assure our compliance.

With becoming GDPR complaint, both HostGator and our clients have obligations. Our Terms of Service requires that clients lawfully obtain and process all personal data appropriately which is something that must continue with becoming GDPR compliant. If you collect EU residents’ personal data, you are likely to be classified as a data controller under the General Data Protection Regulation. To clarify, this means you will have some additional obligations around such things as data subject rights.

We urge you to understand this and seek legal advice where you think necessary. HostGator is reviewing providing our customers with additional features, such as updated consent tools and the ability to respond to a customer data subject request. Moving forward, this email has now established a direct line of communication with our Management Team and will remain assigned to our Department. Please do not hesitate to let us know if you have any additional questions or concerns that we have yet to address.

This is a well written and reassuring response :)
I hope this info is useful to you.

Follow this link if you’re looking for the Windows Emoji Keyboard Shortcut.

I’ve been annoyed that i couldn’t find emoji keyboard shortcuts on Google Hangouts (on mobile or gmail in web browser), i was specifically looking for the thinking face emoji.

Naturally i did the geeky thing and tried to find it.

Here’s the geeky stuff…
The code for keyboard shortcuts is buried in a javascript variable “J7a”
To see the javascript yourself: make sure you have a hangouts chat open in gmail then…
right-click  > inspect > sources

Here’s a snippet of the javascript…
(more geeky stuff)

What you’re seeing there is each keyboard shortcut “:)” and the corresponding Unicode character in decimal.
e.g. 128053 is decimal for the hexidecimal value 0x1F435 (monkey face U+1F435)

Annoyingly, as you can see in the list, my original search for a keyboard shortcut for the thinking face emoji proved fruitless…
There isn’t one

I hope this helps you and saves you from diving into the javascript source!

[19/12/2017] UPDATE:
The road has now re-opened. So the road is back to how it should be with no traffic calming and lovely new two lane bridge!

The B4508 Highworth Road, Watchfield, Oxfordshire, my usual route to and from work is closed.
Google yielded no answers so here’s why and when it’s closed… 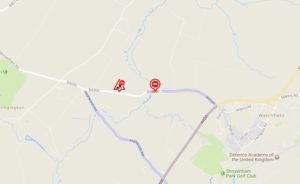 I bought a cheap (£39.99) Connect 8″ Tablet with Windows 10 from eBuyer. It’s pretty good considering the price.
One problem i have had, when switching between front and back cameras, is getting the following message…

Close other apps
It looks as though another app is already using the camera.
If you need it, heres the error code: 0xA00F4243(0xC00D3704)

After much searching online and reinstalling the camera/driver not solving the issue, there are two ways to get this to work: 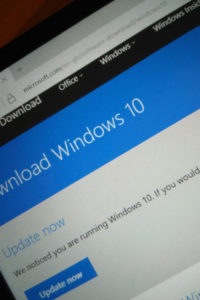 Visit this URL on the device:
https://www.microsoft.com/en-gb/software-download/windows10

Note: You will have to do this each time you switch…Annoying but at least it works without updating!

I believe it does this because the camera app itself is the “other app” mentioned in the error message. As the camera is already in use it fails to switch.

Performing Win + PWR (ctrl+alt+del) stops the current camera and allows it to switch.

Updating to the latest version of Windows 10 fixes the camera app issue.

If you had this problem and it helped you out please tweet or comment below stating the Tablet/Phone model you had the issue with hopefully it will help someone else.

In our office users were complaining of printers randomly going offline even though other users’ computers on the same network were able to print just fine. Usually they would just reboot the PC or disconnect from ethernet and connect to the office wifi instead and it would start working again.

After much exploring of network and IP related settings the solution actually turned out to be ridiculously simple!

Windows Vista and all versions of windows thereafter automatically enable SNMP for networked printers, and if there’s no response to an SNMP message then it stupidly assumes that the printer is offline.
If you didn’t know,  SNMP (Simple Network Management Protocol) is used to get info from network devices (such as printers, switches, routers, servers etc).
Many network printers support SNMP and will happily reply to SNMP requests. In this scenario i discovered that some do not.

Our printers are all reasonably old Brother HL53250DN or HP CP2015 devices (or similar) which seem to have difficulty with SNMP. Essentially Windows will report the printer as offline randomly because it has just tried to get a response via SNMP with no luck.

The easy fix is to just ask Windows politely to not use SNMP to detect printer status.

1. Right-click on the printer in the Printers window
2. Choose the Ports tab
3. Select “Configure Port”
4. Untick the checkbox “SNMP Status Enable”
The printer should then start showing as online again.

This fix has worked on many versions of Windows on the various PCs, laptops and servers in our offices.

To do this…
1. goto HKEY_LOCAL_MACHINE\SYSTEM\CurrentControlSet\Control\Print
2. Add new DWORD “SNMPLegacy” with value of 1 and restart the PC/Server (if safe to do so)

The issue can occur even if the printer does support SNMP but a firewall or network setting is getting in the way. This happened in one of our other buildings using an older router setup.

If you had this problem and it helped you out please tweet or comment below stating the Windows version and printer model you had the issue with.